One of the first levers for responding to oenological or market expectations is located in the vineyard. The Oenoterris® range of nutritional biostimulants aims to correct imbalances encountered in plots and to optimise grape potential. It is paired with the monitoring of agronomic indicators like those presented below.

Nitrogen is an element that plays an essential physiological role in the plant in terms of protein synthesis, photosynthesis and the plant’s metabolism in general (synthesis of amino acids, hormone messengers, etc.). Available nitrogen also plays an oenological role because it impacts the must’s fermentability. The level of nitrogen is therefore an important factor to be measured since the berry touch stage.

Plots treated with the Oenoterris® Programmes have higher nitrogen content, which seems to indicate better nitrogen uptake, as shown by its dosage at the veraison stage. The box and whisker graph opposite shows medians (lines in the middle of the box) and means (crosses in the middle of the box) higher on the Oenoterris® modality, thus illustrating this trend. 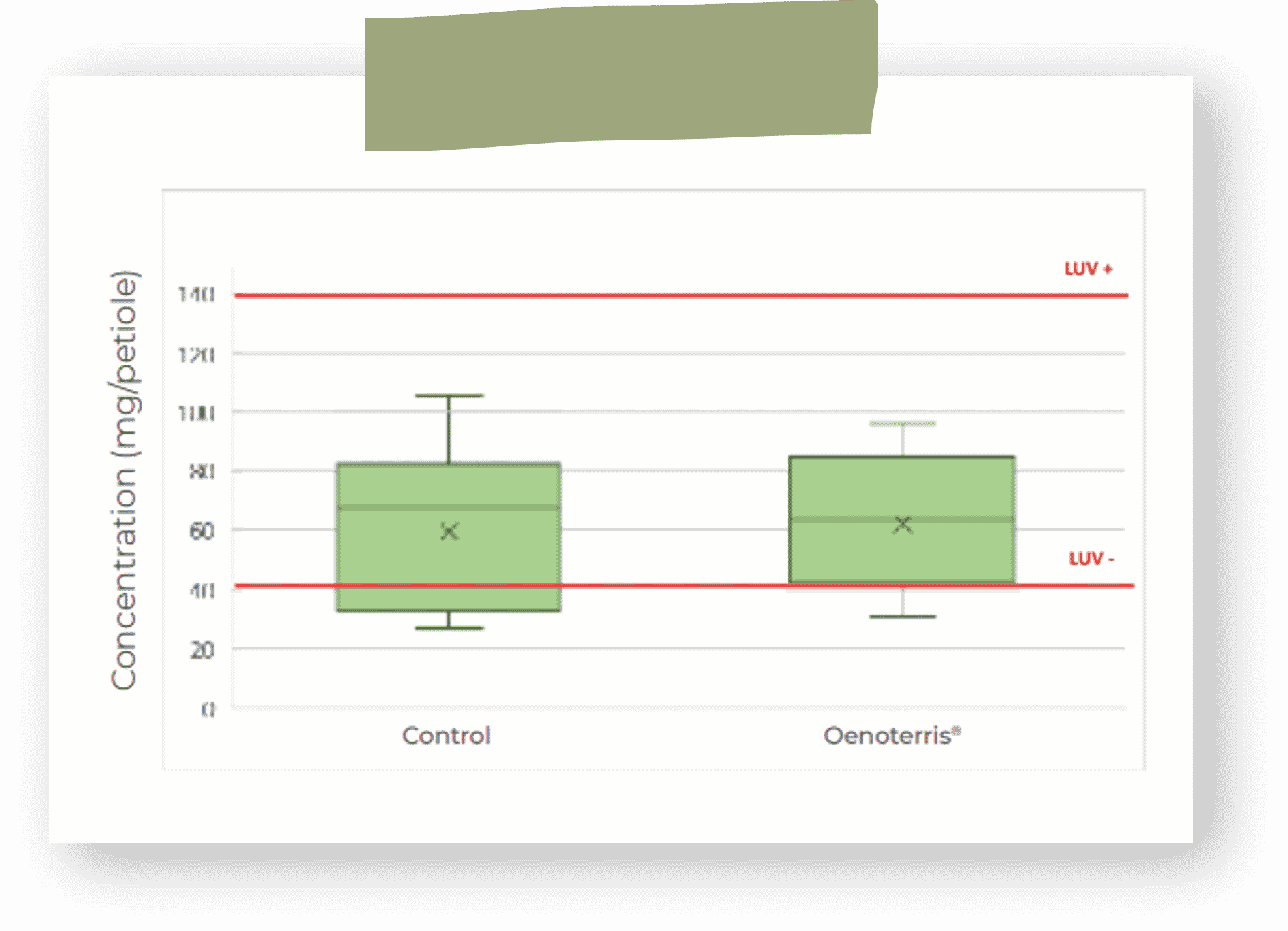 Nitrogen content measured in the petioles at the veraison stage, in plots following / not following the Oenoterris® Programme. The extremes (LUV+ or LUV-) show nutritional imbalance (excess or insufficient uptake).

By reading MaturOx, a specific index optimised to monitor maturation, it is possible, based on an expert rule, to establish a harvest window according to predefined wine aroma profiles.

Based on voltammetric measurement, the index gives a footprint of the grapes as they evolve during maturation (quantity of sugar per berry). The lowest value corresponds to the end of sugar loading. 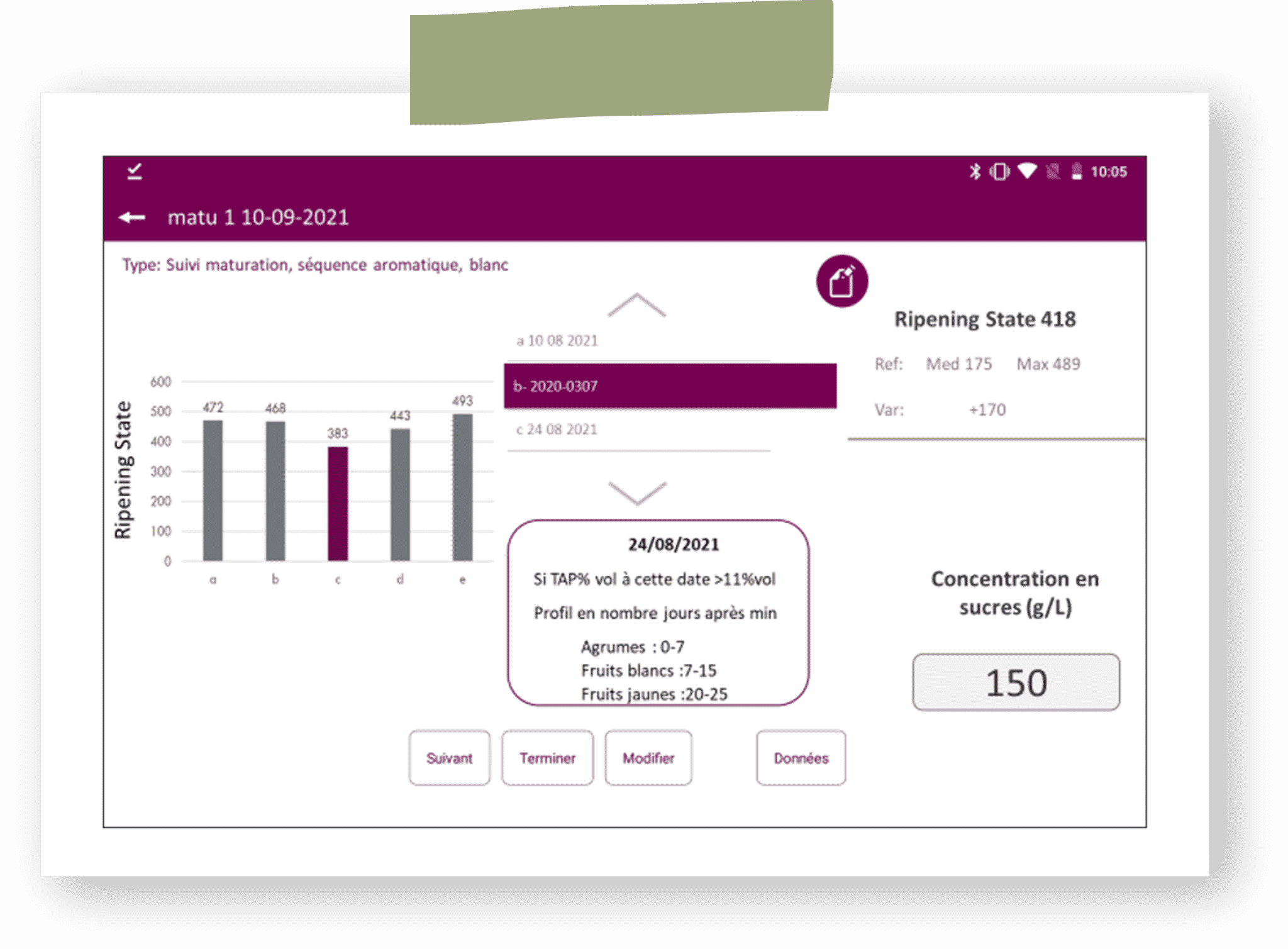 Monitoring maturation and viewing the aromatic window, with the NomaSense™ Polyscan 200 tool.

Measurement indicators and tools for the vineyard

The Oenoterris® programmes include rigorous agronomic monitoring of the plot up to maturity, using differentiating sensors.

Among the tools, Oenoterris® offers a range of nutritional biostimulants to meet oenological goals by targeting problems in the vineyard.

Discover our range of biostimulants

Enhancing the expression of the fresh, intense aromatic profile of white wines

Thanks to the Oenoterris® Fleur and Oenoterris® Aroma nutritional biostimulants, the White and Rosé Programmes promote the synthesis of thiol precursors by stengthening the plant’s resistance to stress and by limiting asynchrony issues.

The figure opposite illustrates the increase in these levels and shows that the median and mean concentrations of cysteine precursors observed in Sauvignon Blanc must are globally higher if these Programmes are applied. 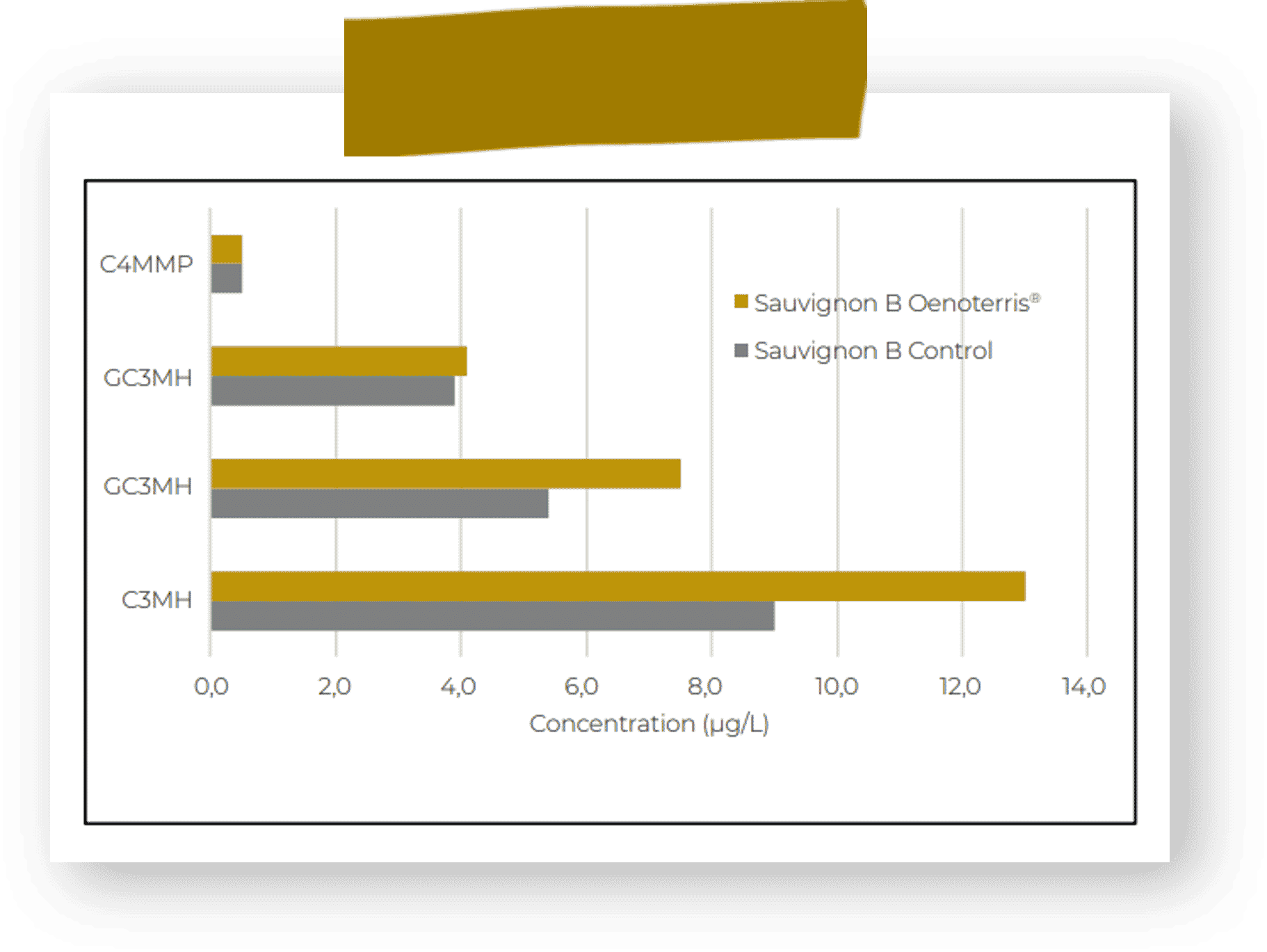 Higher medians and averages of the three molecules (3SH, 3SHA and 4SMP) were found in Sauvignon Blanc wines that followed the Oenoterris® White Programme, illustrating a good conversion of precursor potential. 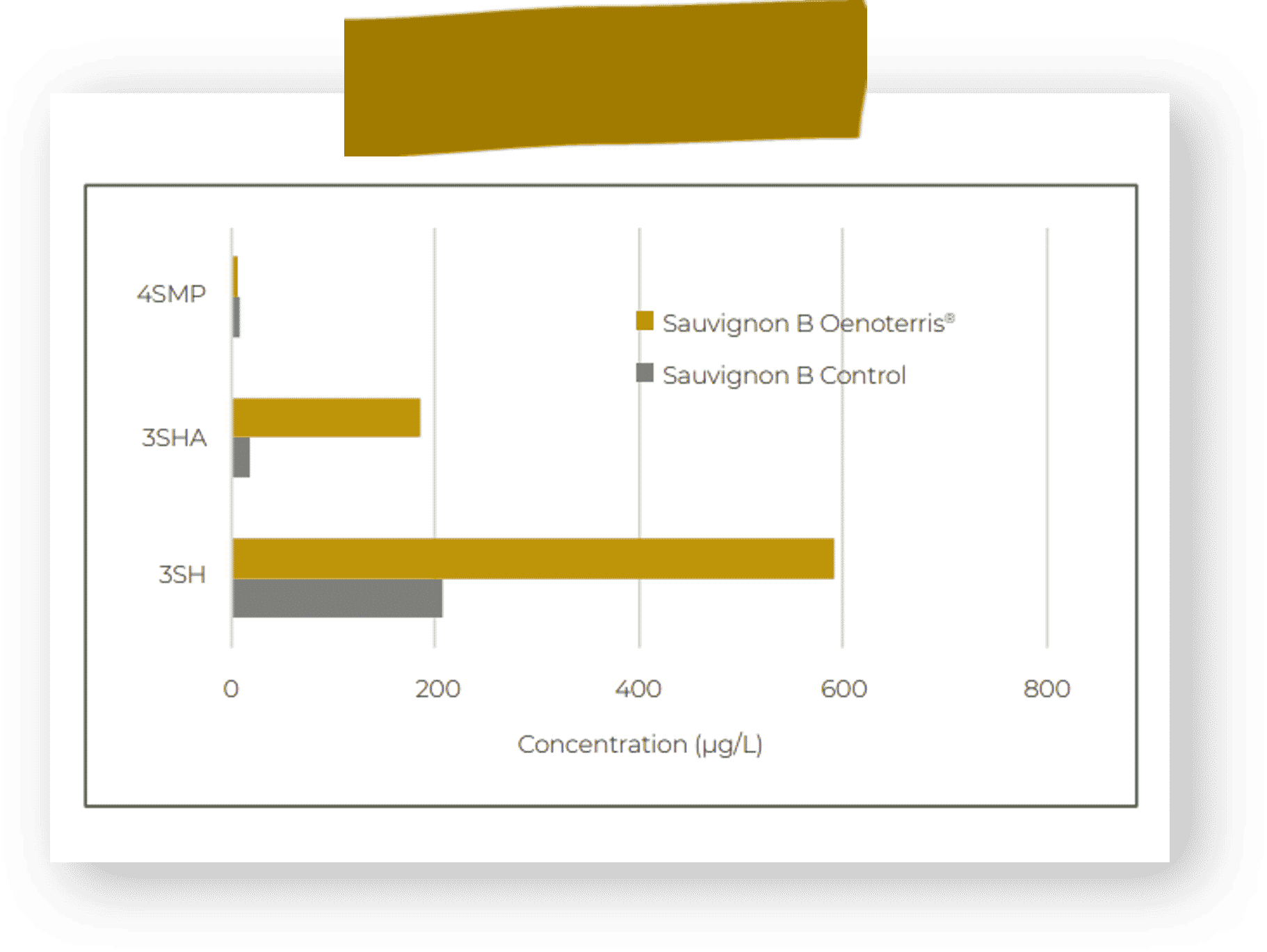 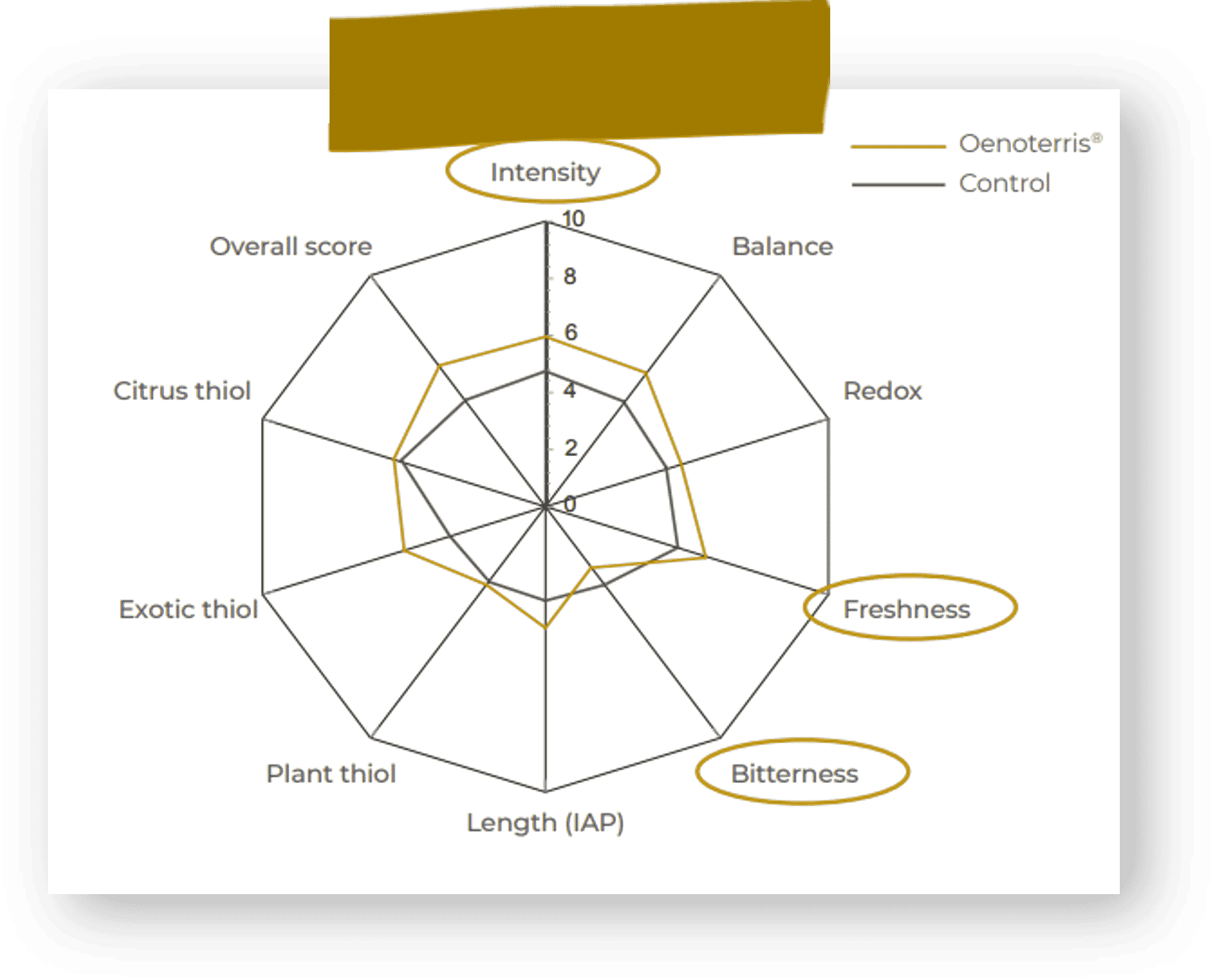 Measurement indicators and tools for the cellar

Each stage of the production process is taken into account, from the reception of the must. The classic parameters are analysed and innovative indicators such as fermentability and organoleptic potential are measured. For wine, we are interested in the analysis of aromas (esters, thiols) and polyphenols.

The Oenoterris® programmes offer various tools such as the Smart'App Fining, a new decision making tool that classifies musts at the end of the pressing process in order to apply the appropriate fining method.
The approach also includes tailor-made protocols to manage the chosen technological itinerary.

Enhancing the expression of the rich, fruity, fresh aromatic profile of red wines

Thanks to the Oenoterris® Fleur and Oenoterris® Expression nutritional biostimulants, theRed Programme ensures the homogeneity of the phenolic maturity by stengthening the plant’s resistance to stress and by limiting asynchrony issues.

The application of the Red Programme results in higher polyphenol concentration in the musts (tannins and total anthocyanins). The graph on the right shows that there are more tannins overall, particularly a higher level of “intermediate” tannins, which therefore implies increased “structure” potential. 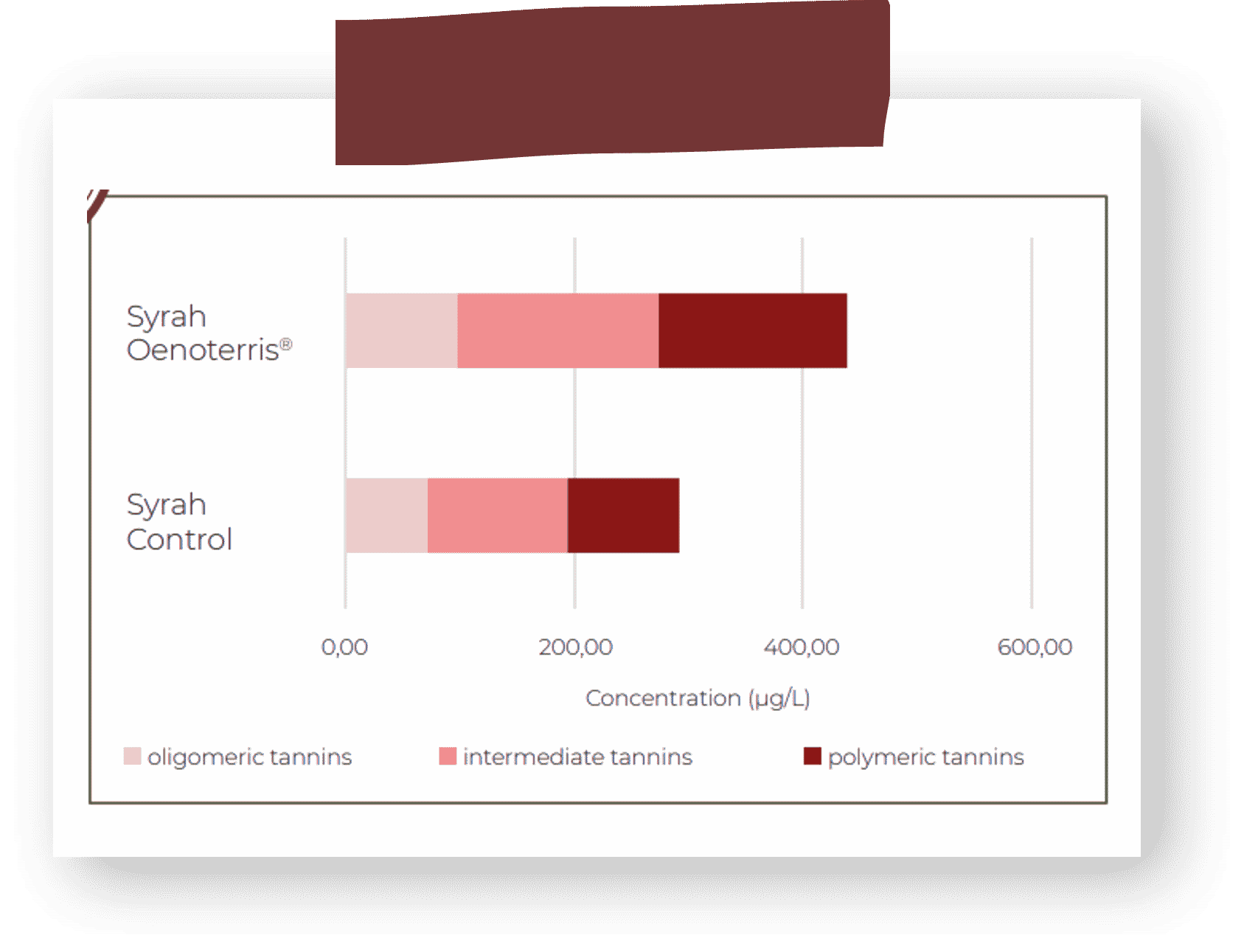 Distribution of tannin fractions in Syrah musts from plots following / not following the Oenoterris® Red Programme.

The production of esters and their level of concentration in wines depends on yeast metabolism and the choice of amino acids present. The Oenoterris® Red Programme enables you to obtain higher ester concentrations , as shown on the opposite graph. 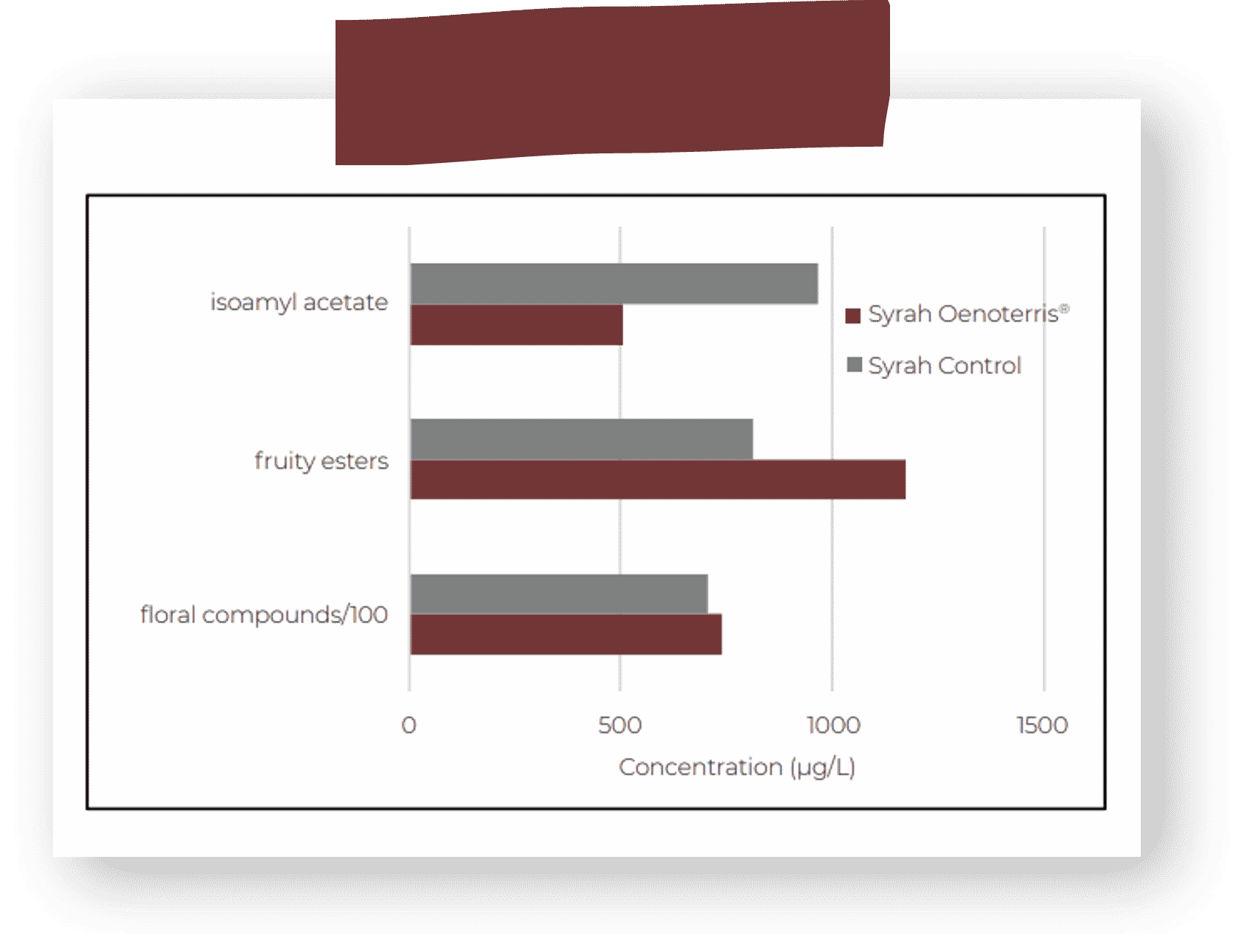 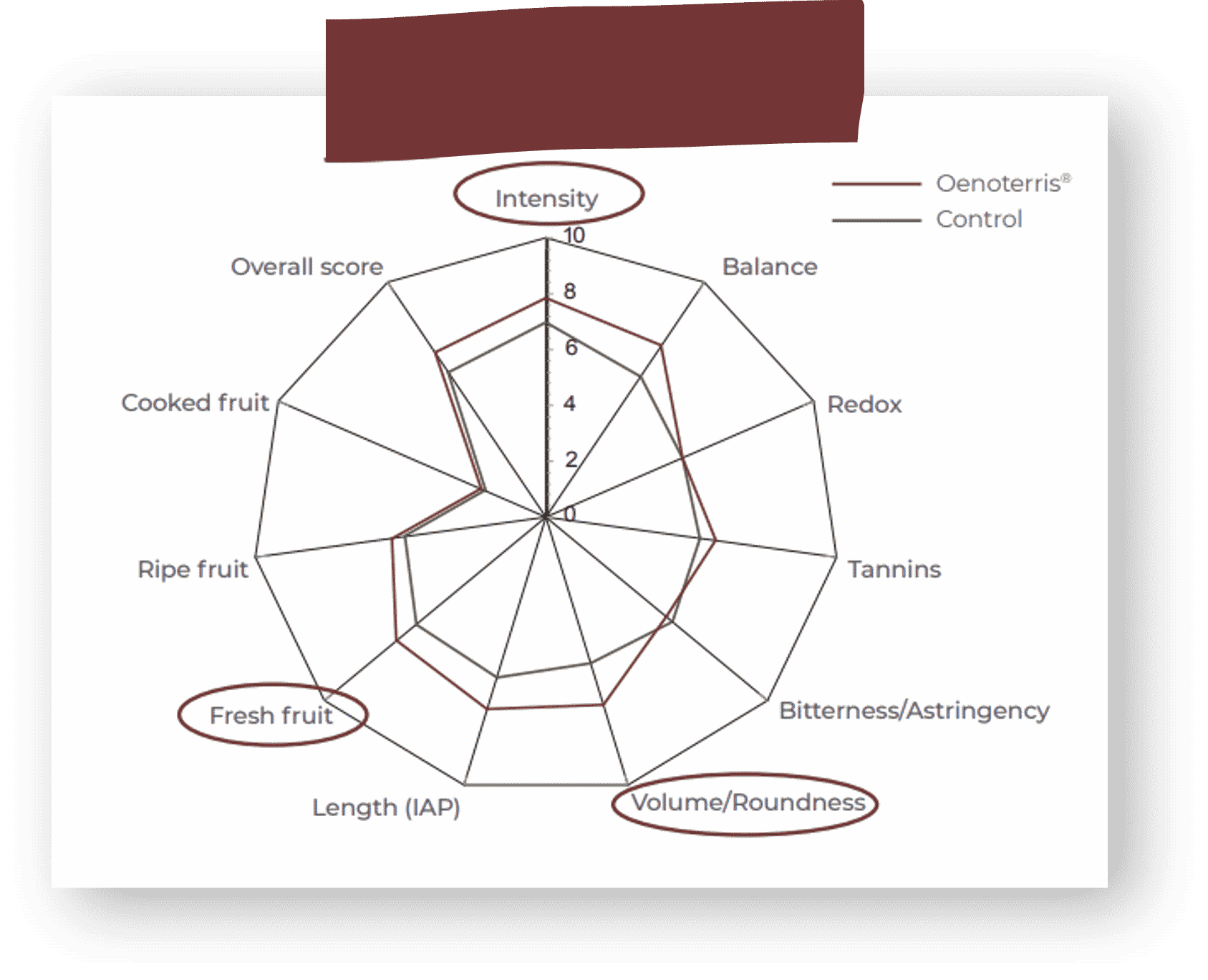 Sensory analysis of Syrah wines that followed/did not follow the Oenoterris® Red Programme.